How do you type the degree symbol on mac and iPhone? 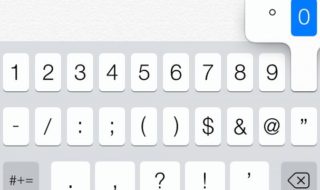 Typing the ° Degree Symbol. If you would like to make the ° symbol when typing, you can use these methods: On PCs – hold down the Alt key and on the numeric keypad on the right of the keyboard, type 0176, or Alt+ 248 When you release the Alt Key, a ° should be there. Degree ° symbol on iPhone and ipad keyboard: get degree ° symbol straight off the numeric keyboard. When entering text (not formulas in Numbers) just tap the .?123 button to switch to the numeric and special character keyboard layout. now press and hold the zero at the top right. A new little mini-menu appears with the degree symbol. slide your finger up to it and let go.

How to Type ° Degree Symbol in MS word

The first way is to simply use the shortcut shown: Just press Ctrl+@ (remember that you need to hold down the Shift key to get the @ character) and then press the spacebar. Bingo! To use the ASCII value, just hold down the Alt key as you type 0176 on the numeric keypad. To use the Unicode value, type 00B0 (although you can leave off the leading zeroes) and then press Alt+X.

Also learn how to type degree symbol on mac.

From the iOS keyboard on your iPhone or iPad:

This is a piece of cake once you learn how to find the temperature symbol, but it’s not immediately obvious by any means, so many users are confused by this and understandably so. Just remember to tap and hold the Zero key on the keyboard and that’s how you get to the degree symbol, which kind of looks like a tiny zero anyway, right?

Using this trick continues on through all versions of iOS, regardless of what the keyboard looks like in iOS 9 or iOS 6 or whatever else you’re running on that iPhone. Quite unlike typing it on the Mac with OS X and Windows, where you can just hit Option+0 there is no such Option/ALT key, instead you must use the tap-and-hold feature to access many of the alternate key options.

You probably know by now that tapping and holding many keys on the iOS keyboard reveals alternatives, ranging from accented letters to special characters and symbols like this one. If you didn’t know that, now you do.

The symbol consists of a small raised circle, historically a zero glyph.

With Microsoft Windows, there are several ways to make the degree symbol:

The method of inputting depends on the operating system being used. On the Colemak keyboard layout, one can press AltGr+\ followed by D to insert a degree sign.