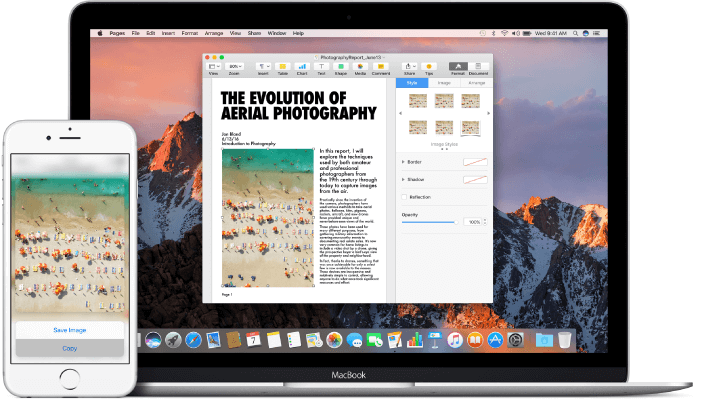 Requirements for Using Universal clipboard on Mac and iPhone:

In addition, Handoff must be enabled on both the Mac and the iOS device:

Once everything is activated, understand how Universal Clipboard works. To get started:

What happens is that when both devices are close,  within range of Bluetooth, they communicate with each other to indicate that they have something on the clipboard. Then, the clipboard whose creation date is most recent is synchronized with the other devices, and moves the data now via Wi-Fi, not Bluetooth. Universal clipboard Mac: How to use Universal Clipboard on your Mac

If you are out of Bluetooth range, the clipboards will not sync.

So these are compatible Macs, marked with the release date onwards:

How to activate Sierra Universal Clipboard

It is important to note that this functionality is temporary and the contents of the clipboard expire from time to time. The idea is to avoid hitting something you copied a while ago and that is no longer relevant in the situation you are working on.

The purpose of sending you photos, videos, text and links to yourself

Universal clipboard Mac: How to use Universal Clipboard on your Mac? The Universal Clipboard from macOS Sierra comes to solve an obstacle when working between our devices. Before, to send us photos, videos, text and links to ourselves we had to do it through iMessage, email, Notes or Photos . But they are not always fast enough. Of course not for me.

With macOS Sierra, Apple continues to iron out rough edges and obstacles in the user experience

This is how Apple has created this functionality, which is born directly from the concept of Continuity presented more than two years ago.  . It should also be said that it is intended for users who own several devices from Apple, who will see it as a welcome novelty. But also as an argument in favor for those who are thinking of making the leap.

I recognize that this functionality attracts me a lot, along with Auto Unlock from Apple Watch . Unfortunately, my 2011 MacBook Pro is not compatible and stays out of the Continuity features. It is not essential in my day to day, but I will thank you at the time you can use it . Users who do not have a Mac compatible, we will have to continue to resort to iMessage, email, Notes or Photos to send us content to ourselves. Universal clipboard Mac: How to use Universal Clipboard on your Mac

How to Use universal clipboard Mac?

You will no longer send yourself the links, documents and photos attached to the mail or the cloud. With this simple trick you can transfer information from one device to another without having to connect it. The Mac Universal Clipboard is one of the main innovations brought by the MacOS Sierra operating system .

It is Apple’s proposal to copy and paste information from one device to another to transfer any text, links, photos and other files from Apple’s ID.

How to activate Mac universal clipboard?

Connections must be enabled on all Apple accounts, check these options on both devices.

Sometimes it may take a few minutes to run from the time you sync your computers, so we recommend you go out and log in to sync.

How to send text and images through the universal clipboard of Mac?

The operation is very simple, you will simply have to use the traditional Copy and Paste .

Synchronize iOS / OS X content and access the clipboard. Write or insert over the texts, images or links you want to transfer, copy and paste in another device.

Although it is a very quick way to pass information from one computer to another, the paste action may take a few seconds to appear available on our other Apple device.

Why? The clipboard uploads the documentation to iCloud and download it at the time of copying, so it will depend on the correct synchronization and the speed of our connection.

Universal clipboard Mac: How to use Universal Clipboard on your Mac?

The fix that is at the top of the list has to do with device compatibility – you need to make sure your devices are compatible and can use this new Continuity feature.

2. Use the same iCloud account on your Mac and iPhone or iPad

If any of your devices are on a different iCloud account, sign in to the common one before trying out the clipboard again.

3. Turn on your Bluetooth

If you are copy-pasting between Mac OS and iOS, make sure both iOS and Mac OS devices have their Bluetooth on and are paired.

On iPhone, iPad, or iPod touch, go to Settings > General > Handoff, then turn on Handoff. On Apple Watch, open the Apple Watch app on your iPhone, then tap General and turn on Enable Handoff.

5. Turn on Handoff in macOS

On your Mac: Choose Apple menu > System Preferences, click General, then select “AllowHandoff between this Mac and your iCloud devices” (below “Recent items”). To turn it off, deselect the option. Universal Clipboard not working on macOS Sierra | Mac os universal clipboard not working

On iOS: On your iOS device, you can do that by going into “Settings” -> “iCloud” -> “Sign Out”. Then go back to the same iCloud page to sign in again.

On your Mac, open “System Preferences” -> “iCloud” -> “Sign Out”. Then from the same iCloud pane, sign in again.

7. Reboot Both Devices iPhone and Mac

Restart iPhone: How to restart

If the Mac has a power button on the keyboard, like all modern MacBook laptops do, this is how you forcibly reboot it:

If the three methods above doesn’t work, then you will need to try this one instead: